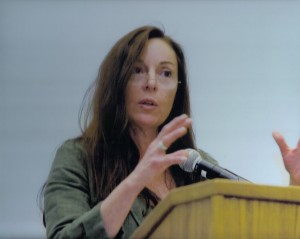 A review by Jeremy Briggs from the Hemphasis staff.

Had it not been for Barbara Filippone, hemp growers would still be selling hemp fiber to potato sack makers and not to many others. Filippone grew up around, and in, the fabric mills of New Jersey. Her mother was a clothing designer and “fabric addict”.

Barbara left the Bruce Springsteen State when she was 17, moving to New York to start working for Indian companies that were importing clothes to New York City and attend classes at Art Students League.

While working for Indian firms in the ’70’s, she collaborated with importers to design garments that would appropriately showcase the beautiful fabrics available. Her job took her to India, where Filippone viewed first-hand the life of Indian workers in dingy textile sweatshops. Workers were getting sick and aging quickly due to their exposure to the harmful chemicals used to process the fabrics they were working with. Filippone decided that she “no longer wanted to contribute to harmful work environments.”

In the early 90’s, Barbara met “three young men named David” selling hemp garments at a trade show, under the name Earth Goods, leading to the job opportunity Filippone needed to get away from the sweatshops in India. Earth Goods hired Filippone because she was the only person they could find who could work with the Thailand-made hemp; rolls of narrow bands of cloth made by hand which made it limited for any application for apparel. Filippone was familiar with working with narrow woven goods since bringing back the Godet design in the India apparel collection she had recently completed.

When the three Davids decided to move on to other endeavors, Barbara joined Eric Steenstra, (now president of Vote Hemp), at Ecolution, в 1994. Earth Goods became a retail store in Glenwood Springs. “Ecolution basically brought me in for design work, but they got more for their buck, because I restructured much of the company.” With her background in textiles and design work, and professional presentation of image-strong sales materials, she instructed them on industry protocols. Ecolution, the first U.S. company to import hemp textiles from Romania, sent Filippone there to design and standardize a collection of fabrics and apparel. Dylan Hilsman runs the company today along with different investors. Ecolution owns all phases of production; from field to factory to market, still using fabric technology that Filippone helped develop.

Ecolution - 1994-1997
Filippone left Ecolution in 1997. Dong Ping Hemp Textiles, a Chinese company, was looking for a “hemp expert” from America, especially since no one at Dong Ping could speak English. They found Filippone. She helped them create a grading system for quality, standardizing the products as she had done in Romania for Ecolution. The Chinese used the terms, “Bawa (for “Barbara”) 1″, “Bawa 2″,” Bawa 3″, and so on, as a grading system, but Filippone wasn’t having it. She changed the item numbers to reflect a standard for a growing industry. In the end, she standardized production of at least forty fabrics, to ensure consistency. Most of these fabrics are still being sold today to other companies dealing with Chinese fabric, most with the same item numbers.

Dong Ping Hemp Textiles - Late 90's
в 2000, some investors approached Filippone with the opportunity to develop a “real company.” They had the money and Filippone had the contacts and the knowledge. The company name was Earth Goods, a name that Filippone was given by the three Davids. Filippone was constantly out of the country in eastern Europe and China developing the hemp textile industry.

Earth Goods, 2000-2002
Filippone left Earth Goods in 2002 to form her own company with the help of her daughter, літо. She contacted her supplier in China to inform them she was starting her own company. Her supplier gifted her a container of fabric to help her get started.

Filippone mortgaged her home and started EnviroTextiles within ten days. At Dong Ping, Filippone had been able to build up a customer base, and they followed her to Earth Goods. Barbara’s customers follow her because she maintains consistency and quality standards, she is professional, knowledgeable, outspoken, and has developed a reputation for honesty. Her daughter, літо, who works at her side, has had the same kind of direct hands-on training from her mother that Barbara received from hers.

After two years of working long days with help from her daughter, літо, Filippone’s EnviroTextiles has generated considerable interest from potential customers and has a vigorous active account list. Today, Barbara Filippone is again the main player in the hemp fabric industry.

Even though China is very restrictive in allowing foreigners in to do business, Filippone has been able to penetrate the mainland and build up a partnership with a textile mill there. The mill allows her to develop hemp fabrics strand by strand under the strictest quality control standards. “No other country’s fabric can match the integrity of Chinese hemp,” she said.

With the help of its Chinese connections, EnviroTextiles has developed numerous 100%-hemp woven and knit fabrics and blends, including hemp/cotton, hemp/silk, and hemp/tencel (Hempcel ®). They also supply yarn, fiber, and the highest quality hemp t-shirt offered today, featured at Natural Products Expo and Seattle Hempfest. Her company has been mentioned in numerous articles in such magazines as In Style; Body & Soul; Promowear Magazine; Hemp Times, Interiors & Sources, and The Denver Post. Mainstream companies of the caliber of Ralph Lauren, J. Petermen, Fruit Of The Loom, Adidas, Nike, Aveda, Sean John, Jack Johnson, and even the EPA, have contacted Filippone with interest in hemp textiles.

Barbara is now creating a new labeling standard for eco-friendly, зелений, all-natural textiles. “I support organic food,” she said, adding, “There is no such thing as organic garments or fabrics, when it comes to mainstream production.”

A sector group of the Organic Trade Association, the Organic Fiber Council (OFC) was formed in 1997 to address these topics. There are no federal standards for the processing of organic raw fiber from the time it leaves the farm to when a finished product is available for retail. OTA’s organic fiber processing standards, approved January 2004, address all stages of textile processing, from post-harvest handling to wet processing (bleaching, dyeing, printing), fabrication, product assembly, storage and transportation, pest management, and labeling of finished products. The preamble to the 2000 USDA rule says, “Goods that utilize organic fibers in their manufacture may only be labeled as a ‘made with organic fiber’.” Filippone believes she has come up with something to take the place of the term “organic clothing”.

Filippone has trademarked the terms SBP™, Sustainable/ Biodegradable Products™, and Sustainable Textiles™. She’s interested not only in “organic” fabrics, but in fabrics grown cleanly that return to the soil cleanly as well. “Recycling is a temporary solution for something that we don’t know how to dispose of,” she said.