Could hemp have a future in Garfield County? 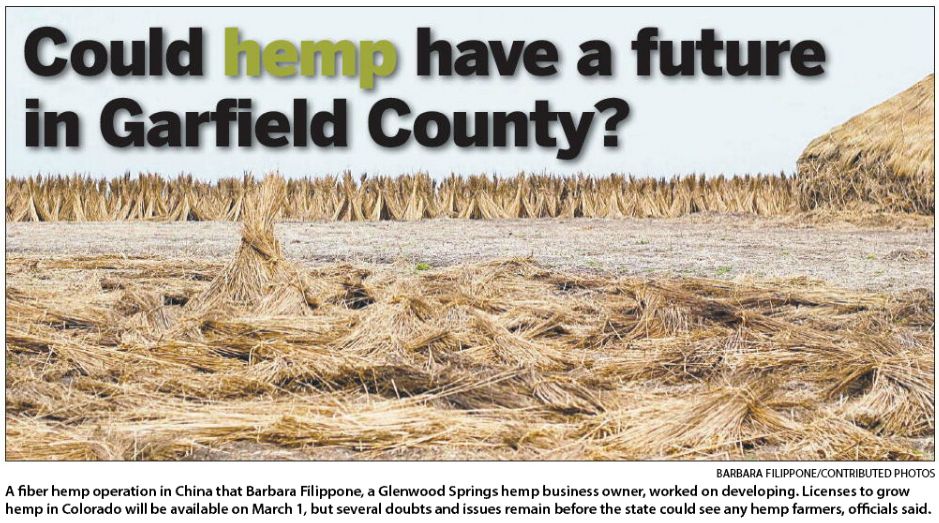 Could hemp have a future in Garfield County?

Colorado farmers can register for licenses to grow industrial hemp starting March 1. But will Garfield County growers pursue it?

“It’s hard to know what to expect,” said Ron Carleton, deputy commissioner for the Colorado Department of Agriculture. “There seems to be a fair amount of interest. The last few months we’ve gotten a number of general inquiries.”

He said he didn’t know how many of those inquiries were coming from the Western Slope or how serious any of them were.

When voters passed Amendment 64 in 2012, they didn’t just vote to allow recreational marijuana sales, but also cultivation of industrial hemp – a crop that does not contain the drug component of marijuana, THC. It’s commonly used in fabrics, paper, rope, soaps and oils.

Industrial hemp used to be a major crop in the United States. The Declaration of Independence was written on hemp paper and the government launched the “Hemp for Victory” campaign to urge farmers to grow it during World War II. In the 1970s, farmers were required to get a permit from the federal Drug Enforcement Agency to legally cultivate it.

But the U.S. Attorney General’s office issued a statement last year that it wouldn’t intervene in hemp and marijuana cultivation in states that legalized it.

Some Colorado farmers have grown hemp crops without interference, even though state regulations didn’t yet allow it.

“I don’t know of anyone in our area who is seriously talking about growing it,” said Pat McCarty, Colorado State University Cooperative Extension agent.

The risk farmers would take is likely to be a significant deterrent, he said.

Farmers have every reason to be wary, said Barbara Filippone, founder of EnviroTextiles in Glenwood Springs. Her company imports finished hemp products for local textile manufacturing.

While Filippone is confident there will eventually be a local hemp industry, she believes farmers need to be careful even after they get state permits.

“There’s no question that one of the challenges is going to be getting seed,” he said. “The federal government said it wouldn’t interfere with growing, but I don’t know how they will feel about using the U.S. Postal Service to transport seed.”

Other than general questions and casual conversation, McCarty said he doesn’t know of any Garfield County farmers who are seriously considering hemp.

“People are always interested in alternative crops,” he said. “If you’re on the leading edge, it could be lucrative. But realistically, we don’t have the infrastructure for the industry.”

That’s a major barrier. Local agriculture experts have tried to grow sugar beets on the Western Slope and couldn’t make the numbers work because crops have to be hauled too far. Sunflower seeds were introduced in Northeast Colorado with some success years ago. But the market has dried up without good marketing and nearby processing facilities.

“Besides, we don’t have a lot of true farmers left in our area,” McCarty said.

The local agricultural industry has shifted toward cattle ranches. Those who do still raise crops grow alfalfa grass and hay.

“There would be a pretty steep learning curve,” McCarty said. “Obviously, at one point it was a major crop, but it hasn’t been for decades. I don’t know if there’s anyone alive in Garfield County who ever raised it.”

Is there a market?

Filippone has helped to build hemp industries in countries around the world, such as India, Romania, Poland, China, Thailand and South Korea. She said there is a market for hemp in the U.S. and Colorado is ideally situated to take advantage of it. But the market isn’t what people expect.

“I’ve had farmers asking me what they need to do to make T-shirts,” she said.

That’s not the market for U.S. hemp, Filippone noted. The country already imports all the textile fiber it needs and there’s no way to compete with nations that already have mature hemp industries, she said. The secret to success will be food-grade hemp seeds and oil, plus ground stalks for use in concrete and other building materials, Filippone said.

She estimated it will take a $29 million investment to build up the local infrastructure needed to support a new hemp industry on the Western Slope, but feels local farmers will be able to start the industry from the ground up.

Filippone said seeds and oil could be processed locally with a small investment in equipment for a central processing station. The stalks could sell to concrete and gypsum board manufacturers on the Western Slope.

Carleton noted the state permit is only good for one year and farmers need to have a contract to sell their product to receive one.

“We’ll have a better idea of the interest level after March 1,” he said.

Hemp can’t get you high, but it can get high-tech