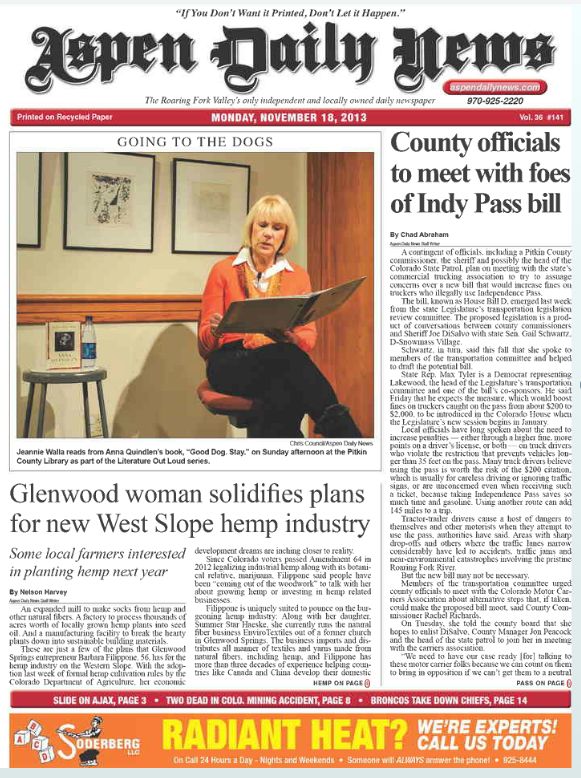 An expanded mill to make socks from hemp and other natural fibers. A factory to process thousands of acres worth of locally grown hemp plants into seed oil. And a manufacturing facility to break the hearty plants down into sustainable building materials.

These are just a few of the plans that Glenwood Springs entrepreneur Barbara Filippone, 56, has for the hemp industry on the Western Slope. With the adoption last week of formal hemp cultivation rules by the Colorado Department of Agriculture, her economic development dreams are inching closer to reality.

Since Colorado voters passed Amendment 64 in 2012 legalizing industrial hemp along with its botanical relative, marijuana, Filippone said people have been “coming out of the woodwork” to talk with her about growing hemp or investing in hemp related businesses.

Filippone is uniquely suited to pounce on the burgeoning hemp industry: Along with her daughter, Summer Star Haeske, she currently runs the natural fiber business EnviroTextiles out of a former church in Glenwood Springs. The business imports and distributes all manner of textiles and yarns made from natural fibers, including hemp, and Filippone has more than three decades of experience helping countries like Canada and China develop their domestic hemp sectors.

Like marijuana, hemp is a variety of cannabis sativa, but it contains almost none of pot’s intoxicating THC. With its close resemblance to marijuana, hemp remains federally illegal to grow, but the U.S. Justice Department indicated last summer that it doesn’t intend to interfere with the implementation of Amendment 64. 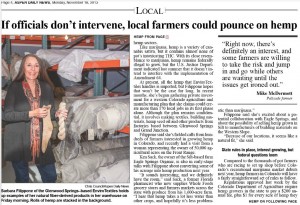 At present, all the hemp that EnviroTextiles handles is imported, but Filippone hopes that won’t be the case for long. In recent months, she’s begun gathering private investment for a western Colorado agriculture and manufacturing plan that she claims could create more than 170 local jobs in its first phase alone. Although the plan remains confidential, it involves making textiles, building materials, hemp seed oil and other products from factories based between Glenwood Springs and Grand Junction.

Filippone said she’s fielded calls from hundreds of farmers interested in growing hemp in Colorado, and recently had a visit from a woman representing the owner of 50,000 agricultural acres on the Front Range.

Ken Sack, the owner of the Silt-based farm Eagle Springs Organic, is also in early-stage talks with Filippone about converting some of his acreage into hemp production next year.

“It sounds interesting, and we definitely have the room,” said Sack, a former Florida pharmacist who now supplies Whole Foods grocery stores and farmers markets across the state with produce from his 1,600-acre farm. “I hear that hemp takes a lot less water than other crops, and hopefully it’s less problematic than marijuana.”

Filippone said she’s excited about a potential collaboration with Eagle Springs, and about the possibility of selling hemp grown in Silt to manufacturers of building materials on the Western Slope.

“Because of our locations, it seems like a natural fit,” she said.

Compared to the thousands of pot farmers who are racing to set up shop before Colorado’s recreational marijuana market debuts next year, hemp farmers in Colorado will have a fairly straightforward set of rules to follow.

Regulations approved last week by the Colorado Department of Agriculture require hemp growers in the state to pay a $200 annual fee, plus $1 for every acre of hemp they grow. They’ll also have to cover the cost of random state inspections intended to make sure that their hemp plants contain less than 0.3 percent THC, and thus can’t be used to get people high.

Despite the relatively light regulatory burden, some farmers remain nervous about the fact that hemp remains illegal under federal law. There are questions about whether shipments of hemp seed from countries like Canada could be intercepted by U.S. customs agents, and the Rocky Mountain Farmers Union, which represents large growers of commodity crops across Colorado, has warned its members to abstain from planting hemp for now, out of fear that it could jeopardize their federal crop insurance.

So far, the lone known planting of the crop in Colorado took place last spring on about 60 acres of land in Springfield, in southeast Colorado, and the farmer responsible had to smuggle his seeds into the U.S., according to media reports.

“Right now, there’s definitely an interest, and some farmers are willing to take the risk and jump in and go while others are waiting until the issues get ironed out,” said Mike McDermott, a Palisade-based farmer who runs a peach orchard, an alpaca farm and a small mill that blends alpaca yarn and Filippone’s fibers into socks.

For Sack, the assurance that the federal government won’t intervene if his hemp plants are approved by the Colorado Department of Agriculture would go a long way toward putting him at ease about hemp.

McDermott suspects that many other farmers feel the same way.

“I think once the farmers get through the whole legal aspect, it will catch on fairly quickly,” he said, adding that hemp is hardier that wheat, corn or other commodity crops and thus ideally suited for the dry and sometimes turbulent conditions of western Colorado.

“We can grow it in pretty much any soil condition we want, and we can utilize 100 percent of the plant,” he said. “If a farmer sees an opportunity to make money without the maintenance of other crops, they’re going to be interested in that.”

Hemp can’t get you high, but it can get high-tech